Glenrothes has come up with a 19 year old expression that is being sold for a wee bit of a guid price.

Glenrothes is a specialty distillery that usually come up with good expressions. Here is the blurb on this one.

A great mix of flavours thanks to a nice blend of 30% 1st fill American and Spanish Sherry oak and 70% refill casks to stop it being overpowering.

I loes Sherried maturations from almost any distillery.

I loes Sherried maturations from almost any distillery.

BenRiach likes to mix it up in exotic maturations!
Here are some examples: 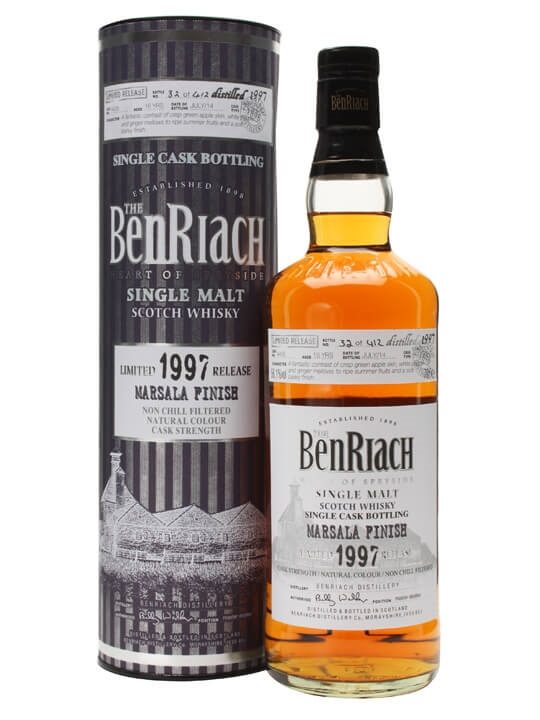 A 1997 vintage Benriach bottled as part of the distillery’s 11th batch of single cask releases. This was aged for 16 years, including a finishing period in a marsala cask before 412 bottles were yielded in July 2014.

This expression is so new tht there are not tasting notes. I like Marsalla but on chicken or veal. I am not sure how a Marsala matured expression will taste.

This is definitely a rare item. Let me know if you feel like buying this whisky and try it.

Nowadays distilleries are throwing away guaranteed age expressions in favor of expressions with sexy sounding names, like Sienna or cu bocan etc. that are not guaranteed age.
Your humble Scotch Spirit Master disapproves of this as it enables them to put any whisky they want into their expressions. And they are doing it as we speak.
I have stumbled onto a distillery that is not going this way( as much) and I want to promote them.
Here is the new expression:
CRAIGELLACHIE 23 Year Old 46%
View Extra Large Image
CRAIGELLACHIE 23 Year Old 46%
Distillery: Craigellachie
There’ a lot of talk about whiskies without age-statements, nowadays, but Craigellachie have jumped right in with a whisky matured for 23 years. It still packs a punch though.
Buy Now
ABV: 46 %
Volume: 0.7 Litre
Region: Speyside
Age: 23 Years Old
$437.17 (Inc VAT)
$364.31 (Ex VAT)

Description Details Distillery: Craigellachie
Staff Tasting Notes
Nose: Citric fruit pours through with the sweet smell of baking pastry. Cigar ash & a light botanic edge give the whisky a healthy weight. It, of course, includes the sweet apples and meaty feel that we’ve come to love in this new range.
Palate: All the citrus fruit! Orange, lime, lemon & grapefruit all tied together with spice & bee’s wax.
Finish: Long & certain. You know that you’ve had a hefty whisky for while after this.
Official Tasting Notes
A malty tang. Oil grit and grist. Summons the mill house of old. Then cinnamon and a menthol dunt. Pig-headed, big flavoured. Sweet and sulphur with each mouthful. A muckle meaty dram
A muckle is a little bit in Scots.
If you are like me, you don’t have 400 simoleons to spread around on a guid whisky. But I just thought it would a whisky that it is nice to know about.
To the rapturous, wild, and ineffable pleasure
Of drinking at somebody else’s expense.
—Henry Sambrooke Leigh
A h-uile la sona dhuibh‘s gun la idir dona dhuibh!
May all your days be happy ones!
Your Scotch Spirit Master

This blog is about enjoying single malt Scotch Whisky and all things Scottish, more or less.

Anyone who visits this site is assumed to be, (at least) an honorary Scot, if not an actual Scot.

It is my mission to educate you, my dear readers, to all of the joys of tasting single malt Scotch Whisky, what it is exactly, how to taste it properly, and other fun things.

We use Scottish sayings and toasts in this blog to ensure a good time is had by all. At least I will have a good time. Scots Gaelic will be used for sayings and blessings as it is appropriate to the subject at hand.

First a little history of Scotch or “the water of life”

We see the first documentation in Scotland in1494 to Barley shipped to a Friar John Cor for use in making aqua vitea, or the “water of life”, in Scottish Gaelic usque beatha. Also sometimes pronounced as whisque baha or usky bagh.

Now King James IV of Scotland was partial to the water of life, and to ensure his supply in 1505 gave the Barbers Guild of Edinburgh a monopoly on the manufacture of aqua vitae. Note this was given to barbers who were the dispensers of medicine at the time, so obviously whisky was considered for medicinal purposes.

Distillation of whisky grew in popularity until the political union of Britain and Scotland in 1707, at which time the bloody sasenaques (or brits) set out to tame the Scottish clans and get some of the profits from whisky through taxing distillation. This drove distillation underground except for a few distilleries.
Taxmen of the Crown were called “Excise Men”. They were always on the lookout for illicit distillers to tax and whisky smuggling became a national sport for 150 years with even the churchmen helping to hide the whisky from them. Sound familiar? During prohibition America had our own revenuers chasing bootleggers.

Our hero, Duke of Gordon on whose estate some of the finest illicit whisky in Scotland was being produced, persuaded the English Parliament in 1823 to legalize the production of Whisky, with a reasonable fee attached of course. Priorly over half of the whisky being produced was illegal and no benefit whatever to the government. In ten years time most illicit distillation died out.
By 1831, Aeneas Coffey invented the patent still, a very important invention, which enabled continuous production of whisky. This led to the production of grain alcohol, from wheat and/or corn which is blended with single malts to make blended whisky, The Scots sold blended whisky to the world keeping single malts for themselves, because blended was cheaper to make than single malt and was more profitable worldwide.

After World War II the British were so broke and needed exports to obtain dollars. Therefore bread was rationed until 1948 to provide more grain to the whisky industry and other English Spirits and beers. To this day whisky is a major English and Scottish Export.

Although single malt has always been available in Scotland, its popularity began to increase when the Macallan Distillery began to offer it internationally. Single malt whisky is like fine wine to aficionados.

So let’s define Scotch Whisky today per British law:
Scotch Whisky according to the Scotch Whisky Regulations of the British Government is a whisky only produced in Scotland from water and malted barley, fermented only by the addition of yeast distilled to an alcoholic strength of less than 94.8% and wholly matured in an official government excise warehouse in Scotland, in Oak Casks not exceeding 700 liters in volume for at least three years. Has no added substances other than water and plain Caramel coloring. Has an alcoholic strength of at least 40% .

Single Malt Scotch whisky means a Scotch Whisky produced from barley and water only from a single distillery.

Blended Scotch whisky means a blend of single malt Scotch whisky with one or more whiskys made from wheat or corn. Like Johnnie Walker or Chivas Regal